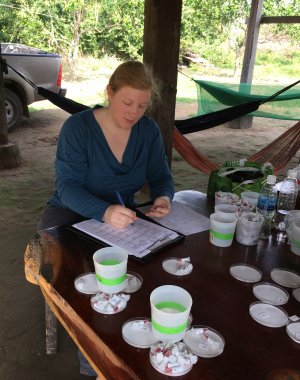 What was it that caught your interest in mosquitoes?

When I took my first entomology class, I just loved sampling insects and looking at them under the microscope – there is so much more detail than when you see them flying around! But it was only when I joined a mosquito ecology lab studying the circadian biology of mosquitoes that live in pitcher plants all over North America that I became interested in mosquitoes specifically. Around the same time, I saw the malaria life cycle in a tropical disease class – that caught my interest immediately, studying malaria vectors in more detail felt really important to me.

You’ve done a lot of work in Cambodia – tell me more about that.

A few years ago, we spent some time comparing methods of trapping mosquitoes. There are various different ways to catch a mosquito – the gold standard is the human landing collection where people sit outside with their legs exposed and collect mosquitoes as they land on them. As they are exposed to potentially infectious bites there are obviously ethical challenges to this method. So how do you collect enough samples to find out which mosquito species are transmitting malaria in Cambodia?

We compared human landing collection with some other standard methods as well as slightly more unusual collection methods, like cow-baited tents. And we found out that we caught about 10 times as many mosquitoes in our cow-baited tents compared to human landing catch, this included the same species of mosquitoes as well as malaria-infected mosquitoes. So we decided to use that moving forward.

But some human malaria-transmitting mosquitoes only land on people, don’t they?

We know the most about Anopheles gambiae which is more attracted to humans than animals. But we also know that there are a lot of different anopheline species in Southeast Asia, which are generalist feeders and will bite whatever is around. Cambodia, in particular, is very complicated because we have found about 35 different Anopheles species during our collections there so far. Individual mosquitoes representing almost two thirds of those species were infected with Plasmodium falciparum malaria. So, it’s obvious that malaria transmission is more complicated than we thought.

What do we know about how these different anophelines are affecting malaria transmission?

We performed a lab study with clinical isolates of P. falciparum from different parts of Cambodia and discovered both artemisinin-resistant and -susceptible parasites went into the different mosquito species very easily, even into Anopheles gambiae, which they wouldn’t normally come into contact with. We know that more than one, perhaps a whole handful of species are contributing to transmission in any one place in Cambodia. To get detailed information about what’s happening on the ground and which mosquitoes are actually transmitting, we have to collect and screen many more mosquitoes to answer that question.

What does a typical working day of sample collections in Cambodia look like?

A typical day starts at around 5pm setting up everything so that we’re ready to start collections at 6pm. From then onwards, we collect from our cow-baited tents every hour all the way through the night until 6am the next morning.

We have selected sites where we have clusters of clinical cases from previous studies and have worked at some of them over several years and seasons. I work with a team of collectors and make sure everything is on time, well-coordinated, and all samples are collected and stored in an orderly manner, solving little hiccups such as when a cow escapes as we go along. We have a portable microscope with a light bulb to start processing the samples during the night, but we tend to leave most of it until the next morning as it is challenging to identify mosquitoes in the middle of the night when you’re tired. At around 6am we have breakfast somewhere on the roadside and then start sorting through the samples and processing them, which can take a few hours if we have collected a lot of mosquitoes.

We have little cups that are labelled by hour and trap type. We put the mosquitoes into barcoded sample tubes with some desiccant that dries the mosquitoes out completely but preserves the DNA for years to come. While identifying, we’re filling out our collection forms – for every single mosquito we write down the barcode and the collection information, the identification information and then we just scan that into a computer which is verified later on.

Of many different systems I’ve used, this is actually the most efficient for dealing with tons of individual samples. Depending on how many mosquitoes we collected during the night, the working time in the morning can go up until midday or even 1pm before everything is wrapped up and we can go and have some rest before starting again at 5pm.

In the lab, we then take the head and thorax of each mosquito and separate that from the abdomen. The salivary glands are in the head and thorax, so if that’s positive with Plasmodium, then they’re more likely to have been infectious rather than just being infected or having an infected blood meal. We then do a DNA extraction and then PCR before sequencing to do the molecular identification using a ribosomal DNA marker. We also do a nested PCR to identify any Plasmodium there and sequence it to identify which species of Plasmodium it is.

How many mosquitoes do you collect roughly during one night? And how many of those carry P. falciparum malaria?

We tend to collect around 200 mosquitoes per night, up to 400 if the collections are going extremely well. I think we’ve increased the rate of our infected mosquitoes by choosing sites where we know that local transmission is happening based on clinical cases. But it’s usually only about 1-2 mosquitoes in a thousand of our field-collected mosquitoes that is infected. So it’s very difficult to find the ones that you actually want, and that’s why we need to collect so many.

How do you think your work can help local malaria control and elimination efforts?

I think it’s extremely important to understand how complicated the community of vectors we have in Cambodia is – it’s not just a couple of species that transmit the disease, it’s just so much more complex. We’ve seen in our collections that a ton of species are infected and so if those are never being screened or never being targeted, you’re not going to be able to reduce malaria using vector control.

Understanding this outdoor transmission, even if you’re just treating these outdoor vectors as one block, like a group of species that could be controlled using some outdoor intervention, will move things forward rather than just focussing on what works in a totally different environment. Bed nets, for example, are still the number one vector control measure used in Cambodia – bed nets have some great successes on the African continent, where there are still indoor-biting mosquitoes, but in Cambodia where the mosquitoes are biting outdoors, they aren’t typically entering houses and so wouldn’t come into contact with those bed nets.
I think it will have to be a combination of different measures to control malaria – one of which should focus on reducing the number of mosquitoes that are biting outside.

It sounds like there is still a lot of work to do. What are the next steps going forwards?

From my work, I have just finished a proof-of-concept study which was a Gates Grand Challenges Explorations grant to see if we could use cow-baited tents fitted with insecticide-impregnated fabric panels as a control tool. We found we have the same species and infected mosquitos entering both the treated and untreated tents. This means that all of these mosquitoes could potentially come into contact with whatever panel or control measure is in there. The generalist feeding behaviour of the anophelines in Cambodia could be exploited to reduce the size of the biting population.

It could also help us to monitor the different species and how they are evolving. Cow-baited tents catch so many different species in meaningful numbers that we can say something about populations of vectors over time and space and by screening them we can get an idea of which are infected. We have found that there are more than twenty species living in one place at one time. How are that many species co-occurring in the same place and not out-competing each other? Even if they are not infected with malaria – it is questions like that about the mosquito ecology in this region that still blow my mind.

Our work with the MalariaGEN Vector Observatory will be interesting in order to answer some of those questions. The project is dedicated to studying malaria-transmitting mosquitoes in different parts of the world, currently focusing on Africa and Southeast Asia. More specifically, with the Vector Observatory, we’ll be studying both species diversity within Cambodia and three species that we know are transmitting malaria in more detail, An. minimus, An. barbirostris, and An. maculatus. We have samples from the six years I’ve been working in Cambodia in different spots every few months so we have a good coverage over space and time of different populations.

And these three species will be interesting to look at because…?

We know that they’re vectors in Cambodia and other parts of Southeast Asia, and they are pretty abundant. They could be biting and transmitting in these different places and, although they are the better-studied compared to other species, they are still very interesting because this will be the first time that we can look at the movement of genes within and between populations, figure out how big a population is of these different mosquitoes, what their population structure is across these different sampling sites and how closely related these species living together are. Those are some really interesting evolutionary and bio-geographical questions that we will be able to answer.

From the first batch of whole genome sequences from diverse species across Cambodia we can see that some of those align to the few reference genomes we have while others are very different. This means we might have to assemble those in a possibly new and different way. Even without a reference we know that they’re extremely divergent from each other so there are questions about how closely related those species are to each other and if that matches up with our current understanding of the taxonomy of those species. Basically, we have so few markers for these species that any references that we can get will be hugely helpful for studying them. There have been a few markers for insecticide resistance and susceptibility to parasite infection identified in other anopheline species, we will be looking for those and other markers relevant to transmission in these species.

One last question to wrap up – do you think we’ll ever get to the bottom of why it’s always at the Thai-Cambodian border where antimalarial drug resistance emerges?

This is what’s crazy! You have this whole super diverse set of parasites, and this super diverse set of mosquitoes in this one place – why is that so unique and maintained? We don’t see any extreme differences between Western Cambodia and Eastern Cambodia and yet we have these totally different parasite populations, and seemingly pretty similar mosquito species. We still have no idea. There is plenty of work left to do.