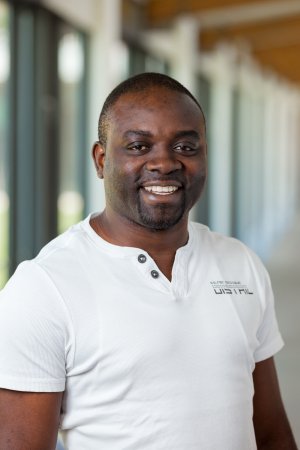 Can you tell us a bit about the Plasmodium Diversity Network Africa? What made you want to get involved?

I think it’s a fantastic initiative. The PDNA is essentially a group of scientists, all at different levels of training but with a common interest in applying next-generation [DNA sequencing] technologies to understand the evolution and adaptation of malaria parasites over time, and using the resulting findings to inform policy and decision makers. And that’s extremely wise. As a network and as a team, the PDNA is one of the best groups I’ve interacted with because the interest of the group supersedes the interest of the individual members of the group. This is what makes the network unique.

I’m assuming that is one of the most exciting factors for you?

Yes it is, because it’s taken me from my niche. It’s exposing me to clinicians and biologists, and it’s connecting me to other parts of Africa that I would otherwise not be interacting with. These types of lateral connections are relatively rare in Africa, so I’m really excited to be part of it.

Tell us more about your role in the PDNA.

Primarily, I’m a member of the network. Through my work at the MRC Unit and my connection with MalariaGEN, I’ve collated some experiences with data analysis. I see my role in the PDNA as someone who can assist other PDNA members, who are now in the same situation I was a couple of years back, to better understand and analyse genetic data, and be able to report findings in a way that will represent their interest from the various sites.

It sounds like mentorship and learning are quite important. Is this a response to particular challenges that the network has?

Success in any field of life is dependent on skills. Our biggest challenge at the moment is to acquire the skills that are necessary to analyse and present the data. This is bearing in mind we’re talking about next-generation data—big genomics data. Many of us in the PDNA have varying skills in this regard, sharing this expertise is an important part of improving the handling of the data and communicating research outcomes. We need to be able to interact with the core problem which is malaria itself—malaria in people who live in communities affected and afflicted by the disease. Learning from each other is an important way to acquire the skills to interrogate malaria adaptations, malaria genetics, malaria genomics in different ways and we need to then be able to go back to these communities and present our findings in a way they can understand. We’re aiming to be a network where all the nodes—or individual study sites—are contributing, sharing skills with a core unit that facilitates this exchange between members. Structured training will also be an important component of achieving this vision.

So in the long run, you see the network as…?

In the long run I see us as not only well-known but to be the most known, the most renowned network for malaria parasitologists.

That is a very exciting and ambitious goal, isn’t it?

I believe in setting ambitions high. My experience is that if you set your ambitions too low then you end up achieving too little. So I am very ambitious and I hope the PDNA can, within its resources, be ambitious enough to be a network that would be representative for the next generation. Because that’s what we’re talking about, it’s beyond epidemiology, beyond diagnostics—it is about next generation science. And there is no way you can achieve that without ambition. A key first step is to introduce what is lacking now: the ability to interact with data at a skill, speed and dimension that is not usually done in Africa.