Poised and waiting for malaria’s next move 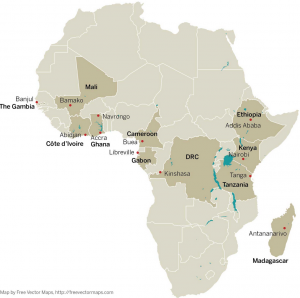 Resistance to the widely used antimalarial drug artemisinin is spreading in Southeast Asia and is likely to be around the corner for Africa. It could reach us very quickly or it could emerge locally.

To make sure we are, we’ve set up the African Plasmodium Diversity Network (PDNA), a group of scientists across the continent working together study malaria parasite genetics and track antimalarial drug resistance. This collaboration is an incredibly positive step that demonstrates our desire to reduce the burden of malaria in Africa.

The PDNA came about during a coffee break at the Genomic Epidemiology of Malaria conference at the Wellcome Trust Genome Campus in 2012. There were just four or five of us then, chatting about trying to set up a collaboration to look at parasite genetics in Africa. We didn’t know how this was going to play out but since that time, the PDNA has grown into a proactive and vibrant network of researchers from 12 different countries across the continent — and we plan to extend the network to better represent the diversity of sub-Saharan Africa.

Our hope is that by working together, undertaking regular monitoring at multiple sites, and sharing data through this network, we will be able to build a rich data resource and have a deep understanding of the genetic diversity of malaria parasites across Africa. It’s crucial that we begin this type of genomic surveillance now, as the landscape for malaria infection and transmission is changing very quickly.

A key first task for the PDNA is to survey parasite populations for the presence of the K13 molecular marker of artemisinin resistance, which was discovered late in 2013. Within months – a very short timeframe for work at this scale – PDNA scientists collected parasite samples that gave a good representation of their region, and then worked with Dominic Kwiatkowski’s team and others at the Wellcome Trust Sanger Institute to genotype the marker across the network sites. This study will provide valuable baseline data in Africa, and the findings are currently submitted for publication; a review article describing the PDNA more broadly has recently been published in Science.

Historically, drug resistance has emerged repeatedly in the same area of south-east Asia then spread to neighbouring countries and, eventually, to the rest of the world. If this happens again with artemisinin resistance, it will certainly take a much shorter time to reach Africa than it did in the past because travel between African and Asian capitals is so much more frequent and so much easier than it was five or 10 years ago. Also, there’s no reason to believe that there couldn’t be a local emergence of drug resistance.

Whenever and however the emergence of drug-resistant malaria parasite happens, the response will need to be quick. PDNA allows us to collect a large number of parasite samples across a huge geographical area and determine the DNA sequence in a matter of weeks.

This regular data collection will also make a big difference for my research in Mali. I work in parasite evolution and when we are dealing with the emergence of a rare genetic event we need a large sample size to pick it up. This network will generate enormous amounts of data, making our research and the research of many other scientists a lot easier.

Of course, these huge quantities of data also pose some challenges. Training will be crucial to developing our ability to analyse, handle and derive knowledge from these data sets. We plan to use bioinformatics specialists to train their peers within the network. We also intend to award PhD fellowships, giving very talented and carefully selected students the opportunity to have in-depth training so that our data handling remains state of the art.

This ambitious endeavour will enable African scientists to confidently advise our respective governments on the status of antimalarial drug resistance across Africa, allowing for quick action and intervention that will save lives.

Abdoulaye Djimdé is Associate Professor of Parasitology and Mycology and an International Fellow of the Sanger Institute (host institution is the University of Science,Techniques and Technologies of Bamako, Mali). He is interested in the genetic epidemiology of antimalarial drug resistance in Africa with a focus on how the genome variation in Plasmodium falciparum contributes to antimalarial drug resistance.