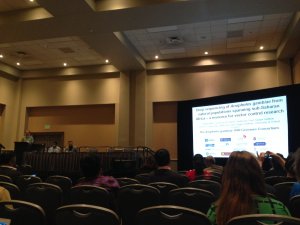 We’re looking forward to this year's American Society of Tropical Medicine & Hygiene (ASTMH) Annual Meeting at the Baltimore Convention Center. As usual, this meeting will be a great opportunity to hear a wide range of malaria-related talks and symposia, and to connect with colleagues to discuss the latest developments in the field.

Below are some sessions we're planning to attend, this is a list of a few scientific sessions as well as more detailed summaries of symposia of interest.

Strong malaria surveillance is increasingly important on the path to eliminating the disease. Led by Yazoume Ye from ICF Rockville, USA, and Jui A. Shah from ICF Washington, USA, this symposium sets the importance of strengthening these tools at its focus, and provides a common forum for attendees to hear from country teams about the role malaria surveillance has and how it can be translated into targeted, case-specific responses as core intervention.

In order to design effective control and elimination strategies against malaria, one key component of public health strategies is to understand the spatial distribution of malaria infection risk and the ability to forecast its spread. Understanding where and when to allocate resources in situations such as the emergence of resistant parasites, the containment of new outbreaks and the monitoring, control and elimination of malaria depends on accurate geocoded demographic, epidemiological and clinical data. The development of improved geospatial models with the integration of new data sources, such as satellite images, mobile phone data and parasite population genetics and genomic epidemiology can reveal new insights, and support local malaria control and elimination initiatives. This symposium is led by Chris Plowe, University of Maryland, and Carolyne Buckee, Harvard T.H. Chan School of Public Health.

David A. Fidock from the Columbia University Medical Center, USA, and Shannon Takala from the University of Maryland, USA, are chairing this symposium on different approaches to understand and mitigate antimalarial drug resistance. With focus on P. falciparum and P. vivax, talks will include information on clinical & genomic approaches, genetic crosses and a new mutator rodent parasite model. Speakers include David Fidock and Shannon Takala, as well as Toshihiro Mita from Juntendo University School of Medicine, Japan, and Ric Price from Menzies School of Health Research, Australia.

This symposium will bring together four experts in malaria molecular and genomic epidemiology who are developing methods for genotyping parasites and associated analytical tools in order to monitor parasite population structure and to track parasite flow and origins: Alyssa Barry from the Walter and Eliza Hall Institute of Medical Research, Bryan Greenhouse from the University of California, Shannon Takala from the University of Maryland School of Medicine and Ananais Escalante from Temple University. They will discuss their unique approaches and experiences in developing molecular tools to support the goals of international malaria control programmes.

Gemma J. Aellah from the London School of Hygiene and Tropical Medicine, and Ogobara Doumbo from the University of Bamako are leading this engaging symposium which addresses ethical challenges in medical research, and aims to fill the gap between ethical guidelines set out by ethics review boards and official documents, and their implementation on the ground, the morally right actions in social interactions with others. It is particularly important and challenging at the same time to talk about economic and political inequalities, which invariably are a major factor when medical research is undertaken in low-income environments. Speakers include Ogobara Doumbo, Paulina Tindana from the Navrongo Health Research Centre, Ghana, Ferdinand Okwaro from the University of Oslo, Norway, Jennifer Stevenson from the John Hopkins Malaria Research Institute, Zambia, Tracey Chantler from the London School of Hygiene and Tropical Medicine and Philister Madiega from the Kenya Medical Research Institute.

The “Tracking Resistance to Artemisinin Collaboration II” (TRAC II) was initiated to map the current spread of the use of triple artemisinin combination therapies (TACTs) in Asia and Africa, and to assess the safety and efficacy of their use in 17 hospitals in six Asian and one African country. This symposium, led by Rick Fairhurst, NIAID/NIH, and Arjen Dondorp, Mahidol Oxford Research Unit, aims to share the near-final results of this large-scale initiative and of the modeling study that evaluates TACTs as a new treatment paradigm to delay the emergence and spread of antimalarial drug resistance. Speakers include Rob van der Pluijm, Lisa White and Joel Tarning from the Mahidol Oxford Research Unit, and our own Roberto Amato.

This symposium will introduce two networks, the PMI-supported Antimalarial Resistance in Africa (PARMA) and the Plasmodium Diversity Network Africa (PDNA), that are dedicated to population-level genetics and genomics of P. falciparum to understand and learn more about patterns in malaria transmission and the impacts of malaria control interventions. PARMA works to support eight PMI countries to incorporate molecular testing of drug resistance markers into standard antimalarial therapeutic efficacy studies, and to transfer capacity for laboratory testing to local institutions. The PDNA's goal is the standardised generation and analysis of Plasmodium genomic data to inform malaria control and elimination efforts. Speakers include symposium co-chair and PDNA leader Abdoulaye Djimdé from the University of Bamako, Meera Venkatesan from the President's Malaria Initiative, US Agency for International Development, Daouda Ndiaye from Cheikh Anta Diop University in Dakar, Senegal, and Alfred A. Ngwa from the Medical Research Council Unit The Gambia. The symposium is led by Eric S. Halsey from the Centers for Disease Control and Prevention.