Current malaria treatment fails in Cambodia due to drug-resistant parasites 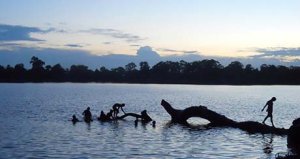 Researchers have confirmed that dihydroartemisinin-piperaquine, the first-line treatment for Plasmodium falciparum malaria infection in Cambodia, has failed in certain provinces due to parasite resistance to both artemisinin and piperaquine.

Dihydroartemisinin-piperaquine is an artemisinin combination therapy (ACT) for malaria that combines potent, fast-acting artemisinin with a long-acting partner drug, piperaquine. Resistance to artemisinin in parts of Southeast Asia is well-documented, but until now only a few studies have presented clear evidence of piperaquine resistance.

The study findings, published this week in Lancet Infectious Diseases, also suggest that artesunate, a form of artemisinin, combined with mefloquine, a different long-acting partner drug, should be the first-line ACT in areas where dihydroartemisinin-piperaquine treatment has failed, the study authors note.

These findings informed new WHO guidelines reinstating artesunate plus mefloquine as the first-line ACT in Cambodia where dihydroartemisinin-piperaquine treatment has failed. The findings also provide evidence to initiate surveillance programmes to track the spread of piperaquine resistance and clinical trials to test alternative combination therapies.

At the Wellcome Trust Sanger Institute, where some malaria parasites used in this study were sequenced, work is underway to further analyse samples from Cambodia. “Clearly the situation with drug resistance is critical. We need to work quickly to identify a molecular marker for piperaquine, and to incorporate it into ongoing genetic surveillance projects,” says Dr Roberto Amato, a co-author on the study and Staff Scientist at the Wellcome Trust Sanger Institute.