First issue of the MalariaGEN newsletter is online 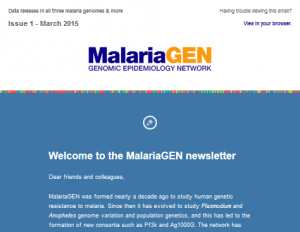 The first issue includes information on large data releases in all three malaria genomes—human, parasite and mosquito—including an important internal data release to Consortial Project 1 partners.
Our programme coordinator, Christa Henrichs, sat down with Dr Alfred Amambua-Ngwa to learn more about the Plasmodium Diversity Network Africa (PDNA).
We also shared our plans for this year’s GEM Retreat, and a list of selected publications including our recent Nature Genetics paper that uncovered at least 20 mutations in the kelch13 gene, a known artemisinin resistance marker, that appear to work in concert background mutations in four other genes to support artemisinin resistance.
Take a video tour of the Ag1000G web application – exploring rich data on more than 765 mosquitoes sampled in eight African countries. And, watch doctoral candidate Will Hamilton discuss how diversity in the var genes helps malaria evade our immune system.
Last but not least, we included a link to a short survey to gather feedback on the MalariaGEN website, which we’ll be updating over the coming months. The survey should only take about 10 minutes to complete and will help us to identify areas for improvement.
If you have any feedback or ideas for future issues, info [at] malariagen.net?subject=MalariaGEN%20website%20feedback">please let us know.
Read the newsletter online.
If you haven’t received a copy but would like to, you can subscribe here.