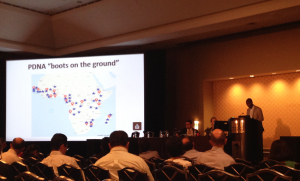 The findings, published in the Journal of Infectious Diseases, provide important baseline information about the prevalence of mutations in the K13 propeller domain in sub-Saharan Africa.

The K13 propeller domain was identified in 2014 as a molecular marker for resistance to the frontline malaria drug, artemisinin. None of the K13 mutations previously reported in Southeast Asia were detected in the African parasites.

However, 22 unique mutations were discovered including seven non-synonymous mutations. Furthermore, some of the mutations were present in several countries, spanning from West to East Africa.

“These findings serve as a critical baseline for tracking the emergence and spread of artemisinin resistance in P. falciparum parasites in sub-Saharan Africa,” says Prof Abdoulaye Djimdé of the Malaria Research and Training Center, University of Science Techniques and Technologies of Bamako, Mali, who is leading the PDNA.

PDNA is an African-led initiative that now includes 17 member study sites working across 15 countries in Africa. Each member is an investigator in their own right, working to capture the full genetic diversity in the malaria parasites across the continent. In the process, they are establishing infrastructure to monitor drug resistance over time, and importantly, connecting this information to policy makers in order to inform malaria control efforts.

“This large study of parasite genetics provides further reassurance that artemisinin resistance has not reached sub-Saharan Africa yet, which is good news for the respective National Malaria Control Programmes,” adds Djimdé.