New insights into the effect of G6PD deficiency on P. falciparum malaria 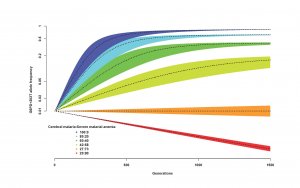 In 2014 we published a large multi-centre study of genetic variants associated with severe malaria from over 30,000 participants across multiple locations that included 8 African countries. This included an analysis of the most common African form of G6PD deficiency (G6PD+202) and showed clearly, and contrary to previous assumptions, that the minor allele at this locus protected from cerebral malaria but exacerbated severe malaria anaemia. The publication of this research added fuel to the debate on understanding the nature of the role of G6PD deficiency in malaria immunity.

In our latest study, published in eLife, we extended our previous work to now examine 70 single nucleotide polymorphisms (SNPs) enabling a study of the G6PD locus at a much higher genetic resolution than has been done before in malaria. These markers were carefully selected to ensure that they were relevant to all the populations in the study. Moreover, they included 15 WHO classified G6PD deficiency SNPs, which we aggregated to estimate each individual's level of enzyme activity. This enabled us to analyse the overall effect of G6PD deficiency across all populations and deficiency SNPs rather than restricting the study to a particular population, or a particular SNP.

This in-depth analysis confirmed our earlier findings and demonstrated that G6PD deficiency per se protects against cerebral malaria but exacerbates severe malaria anaemia. The study also showed that the extent of protection and risk both increase with increasing G6PD deficiency.

The second fundamental question addressed by this study is whether, given the opposing pattern of effects on severe malaria sub-types, it is still tenable to argue that malaria has been the evolutionary driving force for G6PD deficiency.

“We approached this problem in two different ways, firstly by simulating the evolutionary trajectory and secondly by examining the epidemiological equilibrium state through an analysis of attributable risk. Using these methods we were able to show that the balance between G6PD deficiency causing deaths due to severe malarial anaemia at the same time as preventing deaths due to cerebral malaria, could be responsible for maintaining the observed frequencies of G6PD deficiency in the population” says lead author Dr Geraldine Clarke from the Wellcome Trust Centre for Human Genetics, University of Oxford.

Co-author Professor Tom Williams from Imperial College, London, and KEMRI-Wellcome Trust Programme Kilifi, Kenya, confirms ”this study is the most detailed examination to date of the relationship between G6PD deficiency and malaria and brings clarity to what was previously a confusing situation. We hope that our work will stimulate future studies to improve field measurements of G6PD deficiency, in particular the use of modern methods to accurately estimate the enzyme activity of all G6PD deficiency variants.”