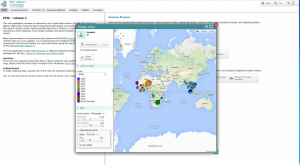 This release comes at a time when the latest wave of antimalarial drug resistance, including the frontline drug, artemisinin, is threatening gains made against malaria.

“The parasites that cause malaria have a tremendous capacity to adapt to our attempts to control them,” warns Dominic Kwiatkowski of the University of Oxford and the Wellcome Trust Sanger Institute. “Drug resistance is the result of a complex evolutionary process, and we need to build resources that will ultimately allow malaria control programmes to monitor and respond to these changes in near real-time.”

This was the impetus for a new global collaboration, the Pf3k Consortium, which was established less than a year ago with the aim of analysing 3,000 P. falciparum samples from the major malaria-endemic regions of the world in order to generate a high-resolution view of natural variation in the parasite.

The pilot phase of the Pf3k project is focused on overcoming many of the technical challenges associated with analysing such a complex genome, by providing solid reference genomes, good baseline data and reliable analytical methods. One example of this work is the development of reference genomes drawn from different populations, which will help researchers to accurately identify genetic changes in parasites sampled directly from patients in different parts of the world.

Reflecting a commitment to the early release of data, the Pf3k Consortium have made their pilot data available under the Fort Lauderdale conditions, and the data can be downloaded or explored using a dedicated web application.

The Pf3k project is led by researchers at the Broad Institute, the University of Oxford and the Wellcome Trust Sanger Institute.

Learn more about the Pf3k Consortium