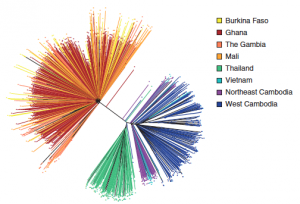 A worldwide collaboration of researchers has shown that resistance to the frontline antimalarial drug – artemisinin – can be identified by surveying the genomes of parasite populations. The effectiveness of this key drug is weakening, threatening hundreds of thousands of lives.

Using new genome sequencing technologies, the researchers discovered multiple strains of the malaria-causing parasite Plasmodium falciparum that appear to be rapidly expanding throughout the local parasite population in Western Cambodia, a known hotspot for drug resistance. These strains have emerged recently and are all artemisinin-resistant.

The scientists were able to characterise distinct genetic patterns or ‘fingerprints’ for each of the strains, showing the approach offers a rapid and novel way to detect and track the global emergence of drug resistance. Their findings provide deep insights into how resistance emerges and is maintained by certain parasite populations.

A major objective of the World Health Organization is to stop the spread of malaria parasites resistant to leading drugs. Researchers from 23 institutions spanning South East Asia, Africa, the USA and UK sequenced parasite genomes from more than 800 malaria samples from Africa and from South East Asia, with the aim of investigating how genetic monitoring of malaria on a large scale could identify and track drug-resistance.

“Our survey of genetic variation showed that Western Cambodian malaria parasites had a population structure that was strikingly different to those of the other countries we analysed. Different not just from countries in Africa, but also different from malaria parasite populations in neighbouring Thailand, Vietnam, and even Eastern Cambodia,” says Professor Dominic Kwiatkowski, senior author of the paper from the Wellcome Trust Sanger Institute and University of Oxford.

“Initially, we thought our findings might be just an anomaly. But when we investigated further we found three distinct sub-populations of drug-resistant parasites that differ not only from the susceptible parasites, but also from one another. It is as if there are different ethnic groups of artemisinin-resistant parasites inhabiting the same region.”

One important benefit of this genetic approach is that, even without knowing the precise genetic causes of drug resistance, researchers are able to quickly identify resistant strains – an important step towards identifying molecular markers to enable effective worldwide surveillance.

“Public health authorities need rapid and efficient ways to genetically detect drug-resistant parasites in order to track their emergence and spread,” says Dr Olivo Miotto, first author of the paper from Oxford University, Mahidol University in Thailand, and the MRC Centre for Genomics and Global Health. “Our approach allows us to identify emerging populations of artemisinin-resistant parasites, and monitor their spread and evolution in real time. This knowledge will play a key role in informing strategic health planning and malaria elimination efforts.”

Western Cambodia appears to be a hotspot for the emergence of drug resistance, but it is not fully known why. Resistance to other malaria drugs, namely chloroquine and sulfadoxine/pyrimethamine, first developed in Southeast Asia before spreading to Africa. This study offers new leads that the consortium will be pursuing as to why drug resistance arises more readily in some locations when compared with others.

“Whilst we have not yet identified the precise mechanism of action or resistance to artemisinin, this research represents substantial progress in that direction. It also provides an important insight into why antimalarial drug resistance (previously to chloroquine and antifols, and now to artemisinin) arises in Western Cambodia,” says Professor Nicholas White of Mahidol University in Bangkok, Thailand and Oxford University. “Artemisinin resistance is an emergency which could derail all the good work of global malaria control in recent years. We desperately need methods to track it in order to contain it, and molecular fingerprinting provides this.”

In the longer-term, the findings provide an important resource for exploring the underlying mechanisms of resistance. Several genetic variations were discovered in genes that are suspected to play a role in drug resistance, notably those that code transporter proteins and those implicated in DNA repair. These findings provide a rich resource for researchers investigating the molecular mechanism of drug resistance.

“This research demonstrates the value of collaborative working to survey the genetic landscape of malaria across the globe,” says Dr Abdoulaye Djimdé from the Malaria Research and Training Centre, University of Science, Techniques and Technologies of Bamako, Mali and the Sanger Institute. “Continuing global genetic surveillance and investigation will help us to identify the emergence of further resistant strains and improve our understanding of how they arise and spread.”

There were an estimated 219 million cases of malaria in 2010 and an estimated 660,000 deaths. World Health Organization Global Plan for Artemisinin Resistance Containment is a call to action that outlines measures to protect the value of artemisinin-based combination therapies for Plasmodium falciparum malaria.

The Wellcome Trust, the Medical Research Council, the National Institutes of Health and the Howard Hughes Medical Institute.