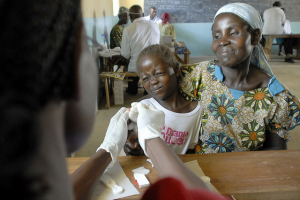 A study of children with malaria in The Gambia, West Africa, has provided new insights into how to conduct genetic studies of common diseases in African populations, which are far more genetically-diverse than European or Asian populations.

The study was carried out by MalariaGEN, a global network of malaria researchers, who are trying to understand why some people die from malaria while others survive despite repeated malaria infections.

Scientists believe that a wide range of genetic factors affect an individual's ability to resist malaria, and MalariaGEN researchers are attempting to discover these by genome-wide association (GWA) studies. This involves looking at hundreds of thousands of points in the genome that might vary between individuals, comparing people who are affected by the disease with the general population.

"GWA studies have been highly successful in discovering regions of the genome that affect susceptibility to common diseases in European populations, but there are considerable challenges in applying this approach to African populations," explains Professor Dominic Kwiatkowski from the Wellcome Trust Sanger Institute, who is leading the project. "That is because there is much more genetic diversity in Africa than in other parts of the world."

Now, in a paper published online in Nature Genetics on Sunday, Professor Kwiatkowski and colleagues have demonstrated a way forward for GWA studies in Africa. The researchers carried out a GWA study of thousands of Gambian children, in search of genetic variants associated with resistance to fatal forms of malaria.

After examining the whole genome they focused on the specific region that contains the sickle cell haemoglobin variant, which is known to be a remarkably strong protective factor against malaria: children carrying one copy of this variant have ten-fold reduced risk of fatal forms of malaria than those who do not carry the variant.

Using a computational method known as imputation, they combined the GWA data with DNA sequencing data from the Gambian population, and found that they could easily detect the malaria-protective effect of the sickle variant. In fact they were able to go further than this, and to pinpoint the precise spot in the genome where this malaria-protective factor is located.

Professor Kwiatkowski believes that this method is the key to genetic studies of common diseases in African populations, which may ultimately reveal more than similar studies on other populations.

"In European and Asian populations, GWA studies can identify regions of the genome where disease resistance and susceptibility factors are located, but pinpointing the exact causal variant within these regions is proving very difficult," says Professor Kwiatkowski. "In African populations, it is the other way round: it is harder work to discover important regions of the genome but, once they have been found, it may be easier to locate the exact causal variant."

This work was funded by the Wellcome Trust, the Bill & Melinda Gates Foundation, the Foundation for the National Institutes of Health as part of the Grand Challenges in Global Health initiative and the Medical Research Council.