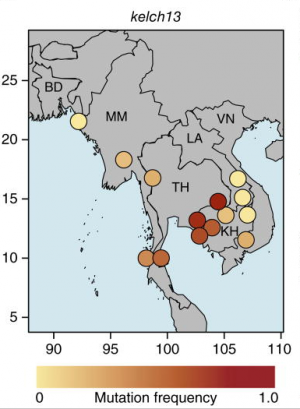 The largest genome-wide association study (GWAS) to date of the malaria parasite Plasmodium falciparum unveils a complex genetic architecture that enables the parasite to develop resistance to our most effective antimalarial drug, artemisinin. The results could help to improve early detection of emerging artemisinin resistance.
Analysing 1612 samples from 15 locations in Southeast Asia and Africa, the researchers were able to identify 20 mutations in the kelch13 gene, a known artemisinin resistance marker, that appear to work in concert with a set of background mutations in four other genes to support artemisinin resistance. The sequence data used in this analysis were generated by the Wellcome Trust Sanger Institute and contributed to the MalariaGEN P. falciparum Community Project by several independent research groups, including the Tracking Resistance to Artemisinin Collaboration.

“Our findings suggest that these background mutations emerged with limited impact on artemisinin resistance — until mutations occurred in the kelch13 gene,” explains Roberto Amato, a first author. “It’s similar to what we see with pre-cancerous cells which accumulate genetic changes but only become malignant when they acquire critical driver mutations that kick-off growth.”

The variety of kelch13 mutations associated with artemisinin resistance, with new variants continually emerging, makes it difficult to use this gene alone as a marker for genetic surveillance.
Monitoring parasite populations for a specific genetic background – in this case, a fixed set of four well-defined mutations in the fd, arps10, mdr2, and crt genes – could allow researchers to assess the likelihood of new resistance-causing mutations emerging in different locations, helping to target high-risk regions even before resistant parasites take hold.

“We are at a pivotal point for malaria control. While malaria deaths have been halved, this progress is at risk if artemisinin ceases to be effective,” says Nick Day, Director of the Mahidol-Oxford Tropical Medicine Research Unit (MORU) in Bangkok, Thailand. “We need to use every tool at our disposal to protect this drug. Monitoring parasites for background mutations could provide an early warning system to identify areas at risk for artemisinin resistance.”

Researchers also uncovered new clues about how artemisinin resistance has evolved in Southeast Asia. By comparing parasites from Cambodia, Vietnam, Laos, Thailand, Myanmar and Bangladesh, scientists found that the distribution of different kelch13 mutations are localised within relatively well-defined geographical areas.
Whilst artemisinin resistant parasites do appear to have migrated across national borders, this only happened on a limited scale and, in fact, the most widespread kelch13 mutation, C580Y, appeared to have emerged independently on several occasions. Notably parasites along the Thailand-Myanmar border appear to have acquired this mutation separately from those in Cambodia and Vietnam. Crucially, parasite populations in both regions possess the genetic background mutations, even though they are clearly genetically distinct.

There remain many unanswered questions. “We don’t yet know the role of these background mutations,” says Olivo Miotto. “Some may not affect drug resistance directly, but rather provide an environment where drug resistance mutations are tolerated. Since kelch13 has hardly changed in 50 million years of Plasmodium evolution, we can assume that this gene is essential to parasite survival. Therefore, kelch13 mutations may severely handicap mutant parasites, compromising their survival unless some other change can counteract this negative effect.”

Mutations in the kelch13 gene were present, yet rare, in Africa but weren't associated with artemisinin resistance and lacked the genetic background present in artemisinin-resistant parasites in Southeast Asia. This provides some reassurance for public health authorities working to prevent the spread of artemisinin resistance to Africa where most malaria deaths occur.

“These data serve as a reminder of how crucial surveillance and elimination programmes are,” says Dominic Kwiatkowski. “At present artemisinin resistance appears to be largely confined to Southeast Asia but the situation might change as the parasite population continues to evolve. By linking genomic data with clinical data we’re developing a better understanding of the multiple genetic factors involved in the emergence of resistance, and that is starting to provide vital clues about how to prevent its spread.”

The Wellcome Trust, the Medical Research Council, the National Institutes of Health and the Howard Hughes Medical Institute.