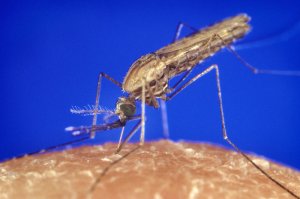 Researchers have exploited a natural experiment created by our use of insecticides to show that large regions of DNA can move between the two types of mosquito that are most important in spread of malaria. The work is important for infection control because it suggests that these mosquitoes can remain distinct species even as they acquire resistance to insecticides from one another.
The team knew that a large section of the mosquito genome was highly different between the two related species Anopheles gambiae s.s. and Anopheles coluzzii. Because of this prominent difference, it was thought the region contained genes important in distinguishing the two species genetically.
Researchers from the Wellcome Trust Sanger Institute collaborated with teams from the Liverpool School of Tropical Medicine and field entomologists in Ghana, to decode genomes of individual wild mosquitoes from southern Ghana. The team found that almost 1.5 per cent of the mosquito genome in A. coluzzii could be replaced by sequence from A. gambiae s.s. when under pressure from insecticide deployment.
The region, which consists of more than three million letters of genetic code, includes an important insecticide resistance gene called kdr.

“Our work demonstrates amazing flexibility in the genomes of closely related species,” says Dr David Weetman, co-first author from the Liverpool School of Tropical Medicine. “The genomic section replaced is huge and was previously considered a major ‘speciation island’ – a probable location for genes that drive reproductive isolation between the species.

“The findings not only call into question the general importance of speciation islands, but also importantly show that these closely related mosquito species can evolve largely separately but then interchange genetic information to allow rapid adaptation to environmental changes driven by human activity.”

The finding is especially significant because the two species are very closely related and the region affected is one of relatively few areas in which their genomes differ substantially. Surprisingly, there is very little evidence that this huge genomic disruption drives the two species to form hybrids, rather they remain stable as two separate species despite a dramatic rise in frequency of the kdr mutation in A. coluzzii.

“Through our collaborations we are learning how to use Anopheles genomic information to address questions of immense evolutionary and public health importance,” says Professor Martin Donnelly, senior author of the study from the Liverpool School of Tropical Medicine. “This paper is just a foretaste of the types of studies that the vector community will be able to perform as the Anopheles gambiae 1000 Genome data sets become available."

The two species, which live side-by-side throughout much of West and Central Africa, exhibit behavioural and ecological differences: Anopheles coluzzii is thought to be able to exploit relatively stable agricultural breeding sites, which can extend malaria transmission far into the dry season. A. gambiae s.s.has traditionally been the more resistant to insecticides, but this is changing with transfer of insecticide resistance mutations.

“This is a wonderful example of how new technologies for genome sequence analysis can elucidate specific biological questions in the field,” says Professor Dominic Kwiatkowski, Head of the Malaria Programme at the Wellcome Trust Sanger Institute, whose team have worked closely with the Liverpool School of Tropical Medicine on the project.

In addition to the new implication for control of Anopheles mosquitoes, the study was an unusual opportunity to investigate the popular theory that new species form through the development of pockets of divergence in the genome containing speciation genes. Driven by technological advances and early work on the Anopheles gambiae species pair, this has become a rapidly growing area of research in evolutionary biology. The authors caution that even very large, divergent and prominent islands in genomes of two related species might be an unreliable indicator of how important the regions are in speciation.

This work was supported by Wellcome Trust Sanger Institute and the MalariaGEN Resource Centre, the US National Institute of Allergy and Infectious Diseases, the Liverpool School of Tropical Medicine and the Wellcome Trust.