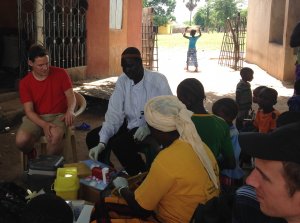 Published in Science, this is the first study to show that large structural variants in human glycophorin genes, which are unusually common in Africa, are protective against malarial disease. It opens a new avenue for research on vaccines to prevent malaria parasites invading red blood cells.

More than 200 million people a year are infected with malaria and the disease caused the deaths of nearly half a million people worldwide in 2015. Transmitted by mosquitos, the most widespread malarial parasite in Africa is Plasmodium falciparum; it is also the most dangerous.

Plasmodium parasites infect human red blood cells and gain entry via receptors on the cell surface. Previous studies on natural resistance to malaria had implicated a section of human genome near to a cluster of receptor genes. These receptors – glycophorins – are located on the surface of red blood cells and are amongst many receptors that bind Plasmodium falciparum. However, it is only now that they have been shown to be involved in protection against malaria.

Researchers investigated the glycophorin area of the genome in more detail than before using new whole-genome sequence data from 765 volunteers in The Gambia, Burkina Faso, Cameroon and Tanzania. Using this new information they then undertook a study across The Gambia, Kenya and Malawi that included 5,310 individuals from the normal population and 4,579 people who were hospitalised from severe malaria. They discovered that people who have a particular rearrangement of the glycophorin genes had a 40% reduced risk of severe malaria.

Dr Ellen Leffler from the University of Oxford, first author on the paper, said:

“In this new study we found strong evidence that variation in the glycophorin gene cluster influences malaria susceptibility. We found some people have a complex rearrangement of GYPA and GYPB genes, forming a hybrid glycophorin, and these people are less likely to develop severe complications of the disease.”

The hybrid GYPB-A gene is found in a particular rare blood group – part of the MNS* blood group system – where it is known as Dantu. The study found that the GYPB-A Dantu hybrid was present in some people from East Africa, in Kenya, Tanzania and Malawi, but that it was not present in volunteers from West African populations.

Dr Kirk Rockett from the University of Oxford, said:

“Analysing the DNA sequences allowed us to identify the location of the join between glycophorins A and B in the hybrid gene. It showed us that the sequence is characteristic of the Dantu antigen in the MNS blood group system.”

Studying the glycophorin gene cluster to determine differences between the sequences of the three genes with confidence is extremely challenging. This study gives insights into unpicking the region and how it connects to the MNS blood group system and impacts malaria susceptibility. Professor Dominic Kwiatkowski, a lead author from the Wellcome Trust Sanger Institute and University of Oxford, said:

“We are starting to find that the glycophorin region of the genome has an important role in protecting people against malaria. Our discovery that a specific variant of glycophorin invasion receptors can give substantial protection against severe malaria will hopefully inspire further research on exactly how Plasmodium falciparum invade red blood cells. This could also help us discover novel parasite weaknesses that could be exploited in future interventions against this deadly disease.”

*The MNS system is a human blood group system based on two genes – glycophorin A and glycophorin B - on chromosome 4. There are 46 antigens in the system; the most common are called M, N, S, s and U.

The Division is one of the largest biomedical research centres in Europe, with over 2,500 people involved in research and more than 2,800 students. The University is rated the best in the world for medicine, and it is home to the UK’s top-ranked medical school. From the genetic and molecular basis of disease to the latest advances in neuroscience, Oxford is at the forefront of medical research. It has one of the largest clinical trial portfolios in the UK and great expertise in taking discoveries from the lab into the clinic. Partnerships with the local NHS Trusts enable patients to benefit from close links between medical research and healthcare delivery. A great strength of Oxford medicine is its long-standing network of clinical research units in Asia and Africa, enabling world-leading research on the most pressing global health challenges such as malaria, TB, HIV/AIDS and flu. Oxford is also renowned for its large-scale studies which examine the role of factors such as smoking, alcohol and diet on cancer, heart disease and other conditions. https://www.medsci.ox.ac.uk/

The Wellcome Trust Sanger Institute is one of the world's leading genome centres. Through its ability to conduct research at scale, it is able to engage in bold and long-term exploratory projects that are designed to influence and empower medical science globally. Institute research findings, generated through its own research programmes and through its leading role in international consortia, are being used to develop new diagnostics and treatments for human disease. http://www.sanger.ac.uk

Wellcome exists to improve health for everyone by helping great ideas to thrive. We’re a global charitable foundation, both politically and financially independent. We support scientists and researchers, take on big problems, fuel imaginations and spark debate. http://www.wellcome.ac.uk