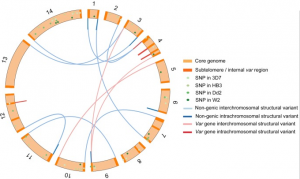 These findings provide deep insights into the stage of the parasite lifecycle that is responsible for causing severe illness, and could explain how the parasites are able to stay in the human body for so long.

In the study, Plasmodium falciparum parasites were kept dividing in human blood for over a year in the laboratory, with the full parasite genome being sequenced regularly. This gave the scientists snapshots of the parasite’s genome at multiple time points, allowing them to track evolution as it unfolded in the lab. They found that the 60 or so genes that control proteins on the surface of infected human blood cells, known as var genes, swapped genetic information regularly, creating around a million new and unrecognisable surface proteins in every infected human every two days.

“These genes are like decks of cards constantly being shuffled,” explains Will Hamilton, from the Wellcome Trust Sanger Institute. “The use of whole genome sequencing and the sheer number of samples we collected gave us a detailed picture of how the var gene repertoire changes continuously within red blood cells.”

The results show, for the first time, that the process of swapping genetic information, known as recombination, happens not when the malaria parasite is inside the mosquito, as previously thought, but during the asexual stage of the parasite’s lifecycle inside human blood cells. This may go some way to explaining how chronic asymptomatic infection, a crucial problem for malaria elimination, is possible.

“It’s very likely that mosquitos are re-infected with Plasmodium falciparum parasites at the beginning of each wet season by biting humans who have carried the parasites, often asymptomatically, for up to eight months during the dry season,” says Antoine Claessens, formerly of the Malaria Programme at the Wellcome Trust Sanger Institute. “During those months the parasite’s var genes are busy recombining to create millions of different versions – cunning disguises that mean they remain safe from the immune system and ready for the new malarial season.”

While further work will be required to fully understand the mechanism driving the recombination of Plasmodium falciparum’s var genes, scientists were able to calculate the rate at which it happens. They found that var gene recombination takes place in about 0.2 per cent of parasites after each 48-hour life cycle in the red blood cell. With about a billion parasites living inside a typical infected human, there is huge potential for the parasite to create new, recombined var genes inside each person with malaria. This pace of change far exceeds that of genes in any other region of the parasite’s genome.

“When you consider that 200 million people across the world are infected with malaria and each of them is harbouring parasites that are continually generating millions of antigenic variants, it becomes apparent why our fight against malaria is so challenging,” says Dominic Kwiatkowski. “This study is a great example of how genome sequence analysis is enriching our understanding of malaria biology. By learning the genetic tricks that the parasite uses to evade the human immune system, we will be in a much better position to eliminate this deadly disease.”

Watch Will Hamilton talking about the study below

The Wellcome Trust and the Medical Research Council.