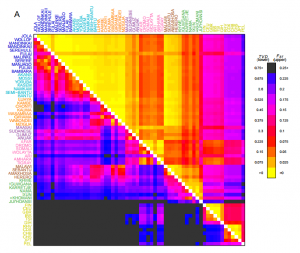 Researchers from the University of Oxford have revealed that the genetic ancestries of many of sub-Saharan Africa’s populations are the result of historical DNA mixing events, known as admixture, within the last 4,000 years.

Their study, to be published in the journal eLife, uncovers signatures of these admixture events through a large analysis of DNA from populations across the continent. The discovery provides a foundation for the recent genetic history of the continent, which could aid future studies of non-communicable and infectious diseases, such as malaria.

While admixture has been demonstrated in other regions of the world, the new analysis has allowed the team to characterise sub-Saharan Africa’s mixing events in an unprecedented level of detail.

“As Africa has few written records of its history, it is somewhat unknown what important movements of people generated the populations in the continent today,” says lead author George Busby, Statistical Geneticist at the Wellcome Trust Centre for Human Genetics.

“Looking at and comparing the differences in the genomes of people alive today can help us better understand and reconstruct the historical interactions that brought their ancestors together.”

The team used DNA analysis to characterise the structure of genetic diversity and gene flow – the transfer of genes between different populations – in a collection of 48 sub-Saharan African groups. The data used for these analyses were drawn from several sources, including a subset of samples collected for a malaria susceptibility study, MalariaGEN Consortial Project 1.

By applying recently published approaches designed to identify blocks of similar DNA within and between populations, they discovered that most sub-Saharan populations share ancestry with groups from outside their current geographic region as a result of gene flow within the last 4,000 years. The approaches used by the team were particularly tuned to picking up signals of admixture from within this timescale.

“Our research provides further genetic evidence that the spread of Bantu languages and agricultural technology from Central West Africa, known as the Bantu expansion, was likely to be accompanied by people who moved from Cameroon to the south and east within the last 2,500 years. Additionally, we revealed that coastal populations in western, eastern, and southern Africa experienced small influxes of Eurasian genes as a result of different events over the last 3,000 years,” Busby explains.

“These findings show that groups from similar parts of Africa experienced admixture events at similar times and involving similar sources, suggesting that genetic variation in these areas of the continent has been shaped by shared historical events. It is also clear that our ancestors have always moved about and traces of these migrations are left in the DNA of people alive today.”

Busby adds that this research will be relevant to future epidemiology studies, which aim to uncover novel relationships between genes, the environment, and disease.

“An important next step will be to look at the consequences of our observed gene flow and ask if it has contributed to spreading beneficial or detrimental mutations around the continent,” he says.

Professor Dominic Kwiatkowski, from the Wellcome Trust Sanger Institute and the Wellcome Trust Centre for Human Genetics, adds: “Africa has an exciting and important role to play in furthering our understanding of human biology and disease.

“Ongoing efforts to generate and analyse large-scale genomic data are yielding new insights into patterns of genetic diversity on the continent. This sheds light not only on the historical movements of its people, but also has the potential to transform how we make sense of genetic differences that effect the development and progression of various diseases, including malaria.”

The paper ‘Admixture into and within sub-Saharan Africa’ can be freely accessed online at http://dx.doi.org/10.7554/eLife.15266. Contents, including text, figures, and data, are free to reuse under a CC BY 4.0 license.

eLife is a unique collaboration between the funders and practitioners of research to improve the way important research is selected, presented, and shared. eLife publishes outstanding works across the life sciences and biomedicine — from basic biological research to applied, translational, and clinical studies. All papers are selected by active scientists in the research community. Decisions and responses are agreed by the reviewers and consolidated by the Reviewing Editor into a single, clear set of instructions for authors, removing the need for laborious cycles of revision and allowing authors to publish their findings quickly. eLife is supported by the Howard Hughes Medical Institute, the Max Planck Society, and the Wellcome Trust. Learn more at elifesciences.org.