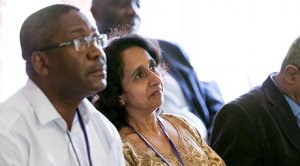 Can you tell us a bit about the malaria situation in Sri Lanka and how it has changed?

When I joined the University of Colombo as a Lecturer in 1989, malaria was a major problem with around 400,000 cases per year. But there’s been a drastic reduction since 2000 with no evidence of local transmission in Sri Lanka since 2012. So, according to the World Health Organization criteria, Sri Lanka has fulfilled the requirements to be certified as a malaria-free country.

The main focus is now surveillance. Sri Lanka is an island and this is a plus-point in our efforts to remain malaria-free. However, we still have to be vigilant about imported cases of malaria, since all the cases diagnosed during the past three years were from travellers. We make sure malaria medication is available free of charge through government hospitals and free prophylactic drugs are offered to those travelling to malaria-endemic countries. There are signs at the airport to inform people who have travelled to malarial areas to get themselves screened and educational programs to enhance awareness among both the general public and the medical community to ensure that people with malaria symptoms get diagnosed early and receive prompt treatment under medical supervision.

If the malaria in Sri Lanka is coming from travellers, can sequencing the parasites’ genomes help?

Absolutely. We can use whole genome sequencing to get an idea of from where the parasites originated and the genetic markers developed through such efforts, this will be very useful to understand patterns of transmission and to differentiate local cases from imported ones.

Genetic tools are particularly important for how to culture organisms such as Plasmodium vivax, and they would be critical for evaluating the effectiveness of interventions and for monitoring of sustained efforts.

What do you think about the balance of research between Plasmodium falciparum and vivax?

There is more research being done on Plasmodium falciparum than other species, but in the last few years there’s growing interest and also funding made available for vivax studies. This likely stems from recognition of its importance for malaria elimination. I also think everyone has accepted that it would be impossible to achieve the more ambitious goal of eradication without focusing on vivax. Sri Lanka is a good example, when you consider how the country has battled with Plasmodium vivax during the last few years. So, I believe the picture has changed and there is a lot more focus and interest on Plasmodium vivax now but still more could be done.

Can you tell us about the Sri Lanka Plasmodium vivax paradox?

It was an interesting finding because you would think from experience with Plasmodium falciparum that when there is a population bottleneck for the parasites—when case numbers go down—that the parasites that are left will be more homogenous or alike. In Plasmodium vivax what we saw was the exact opposite: there was an increase in parasite genetic diversity with decreasing levels of transmission. There was also a high proportion of mixed clonal infection during that dwindling phase of malaria during the last few years. We calculated the effective population size of Plasmodium vivax using genetic data from across the country and saw that with the collapse of demographic population size there was very little change in the calculated population size of parasites. This was quite in contrast to what we expected to see and in the present context, it actually highlights the importance of surveillance measures to prevent a resurgence of malaria in the local setting.

You also work on Leishmaniasis. Is this related to your work on malaria?

I find the experiences that I have gained through my work on malaria, has really helped in planning out the projects and building up a new team who work on Leishmaniasis. It is a newly emerged disease in Sri Lanka so there is dearth of information on the subject in the local setting that I am trying to contribute towards. The experience I gained through working on malaria and with MalariaGEN has helped enormously in setting up these new projects, establishing collaborations, organising training for young local scientists, and so on for which I remain very grateful.

MalariaGEN has been going for 10 years now and you have been part of it since the beginning, what do you remember about the beginnings on the project?

I first heard about it through Dominic, who had links with our laboratory as far back as the early 1990’s. When MalariaGEN came about, I had discussions with both Dominic and Richard Carter from the University of Edinburgh about the potential to develop a project for MalariaGEN. I realised that this was going to be challenging since almost all of the other sites identified for the study had high levels of malaria transmission, while we had very low and seasonal malaria transmission in Sri Lanka. So, we had to be innovative in designing our project.

I remember, it was quite a challenging period for MalariaGEN at the beginning because people who were gathered to discuss the projects had so many different ideas, different project proposals, and it looked almost an impossible task to fit all these things in within a common framework. However, it was done and I think it has worked really well.

The mutual learning experience through the network was very valuable since the partners had different backgrounds and levels of experience with malaria.

I think MalariaGEN has successfully achieved what it set out to do, and it feels amazing and almost unreal thinking of how it started and how it brought us all together—partners from so many countries working within a common framework. Ultimately, we benefited in many ways through this experience. So, I think, MalariaGEN has created history and will be considered as a model for networking through multicentre studies for generations to come.

Learn more about the history of MalariaGEN on Our approach page.

Learn more about the Department of Parasitology at the University of Colombo, Sri Lanka.