Community involvement and joint ownership of health research in Tanzania 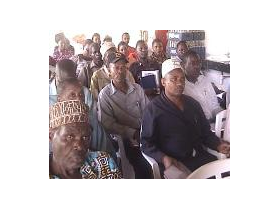 Korogwe site is where we at the National Institute for Medical Research are undertaking one of our Consortial Project 2 studies. In 2003 two neighbouring villages (about 25km apart) located at different altitudes, and therefore with different malaria transmission intensities, agreed to participate in various studies of the epidemiology and immunity of malaria. In all these studies community involvement and joint ownership have been recognised as critical components of the projects. Since 2003 the study has expanded to include more villages.

Community participation started at the initial stages of village selection when consent to participate in the study was sought through a series of village meetings. We met with political leaders to get their support for the study and with village leaders who then organised meetings with community members. The communities were updated at least once a year through sensitization meetings. Documents were prepared showing a summary of the results that had been obtained including demographic data, parasite prevalence and bednet coverage. These meetings formed an important platform for the community members to interact with researchers and to seek clarifications. The meetings also helped to assure researchers that the communities were willing to continue to participate in the projects.

Community members have a very different level of knowledge about health research so it has been a challenge to convey information clearly and simply. Feedback presentations were initially prepared in English and later translated in the local language - Kiswahili. However, some of the scientific concepts were not easy to translate. We worked with political leaders who helped to bridge the communication gap. Concepts were presented to village leaders and members by informing them that malaria parasites, like human beings, are not all indentical. Most of an individual's physical characteristics are due to genetic material inherited from both parents. Analysing genetic material can therefore help to detect acquired disorders such as albinism and help to determine the factors that make some people resistant/susceptible to malaria and other infectious diseases.

Occasionally issues arose in villages which required unscheduled meetings to resolve. For example, political or personal tensions led some people to give confusing messages to their fellow community members. We were able to respond promptly by organising meetings with community members and/or leaders to help resolve the problems and maintain a good relationship with the community.

The process of community participation is useful because it obliges researchers to be confident and knowledgeable about their studies. However, it also requires financial resources and this is not often taken into account during budgeting. Overall, the process of maintaining communication with study communities and the general public is important and should be supported to ensure that genetic studies are implemented with public support.