A view from the field 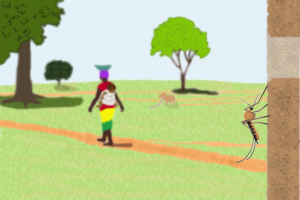 I heard her cries before I saw her. Rita* is a slight girl, maybe eight years old, and she has malaria. In this part of West Africa – a far northern corner of Ghana, near the border with Burkina Faso – the most likely culprit is the parasite Plasmodium falciparum that causes the deadliest type of malaria.  Rita emerged from the clinic: teary-eyed, exhausted, miserable. She walked slowly and unsteadily beside her mother, and then dropped to the floor and vomited.

The girl’s mother comforted her as best she could. In her hand, she held a small box of antimalarial medicine that would cure her daughter. She also carried with her an information pack on a research study she had just agreed to take part in. A sample of Rita’s blood had been collected, and from this small sample researchers would be able to analyse the genetic makeup of the malaria parasites replicating within her body.

Our understanding of P. falciparum biology and disease has advanced significantly in recent years, thanks in large part to blood sample donations from infected people. Working collaboratively, studies have collected thousands of blood samples from patients across the globe. Scientists are now able to routinely isolate parasite DNA from these blood samples, and use next generation sequencing technologies to read a parasite sample’s entire DNA sequence – or whole genome.

By comparing and contrasting thousands of parasite genomes, scientists have generated an immense resource of genetic data that is powering cutting-edge statistical analyses – and transforming our understanding of the ways that parasites evolve resistance to the drugs we use to treat the infection.

But we should never lose sight of the origins of these data: the everyday challenges and triumphs in the field, at the clinic that are the foundation of the research that follows. This is a human story, and every malaria researcher involved in sample collection can add to this tale. I recently travelled to the Kassena-Nankana Districts in Ghana to assist with sample collection, where I witnessed the journey from malaria patient to genome sequencer.

The journey from malarial fever to sequencer

To get a blood sample containing malaria parasites, you first have to reach people with malaria. In the Kassena-Nankana Districts of Ghana, this is easier said than done – and not because malaria is uncommon. P. falciparum malaria remains stubbornly endemic here, with a big peak in transmission around the rainy season that lasts from July to December. Many of the people suffering from acute malaria live in impoverished rural communities. Reaching these communities is difficult. Only big 4x4s can access most of the clinics, and even they struggle with the poor-quality roads, made worse by heavy rains. Distances are calculated and communicated in time: knowing a clinic is 10km away is not the most useful measure when it may take more than an hour to get there.

People feeling unwell in these remote rural areas will visit their nearest health clinic, or are brought in by their parents (children are disproportionately affected by illness here). A nurse or healthcare worker will assess their symptoms. If the patient has fever, fatigue, muscle aches and pains—the symptoms of malaria—they are tested for malaria parasites using a Rapid Diagnostic Test (RDT). If the RDT is positive, the patient will receive antimalarial medicines. 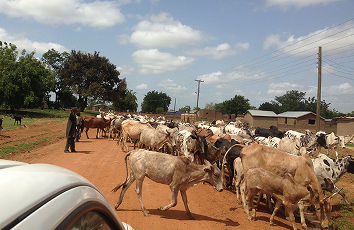 Before a blood sample can be drawn for our research, a field worker will explain the basic aims of the study, potential risks and benefits of taking part, what will happen with their blood sample, and reassure them that their personal details will be kept confidential. Patients are encouraged to ask questions and are given our contact details, in case they think of anything later. If they give consent, they will be enrolled in the study and a blood sample will be taken.

Linguistic and cultural barriers complicate efforts to gather informed consent. Here in the Kassena-Nankana Districts, there are several major ethic groups including the Kasem, Nankam, Buli, Akan, Frafra, Fulani, and others. Each ethnic group speaks their own distinct language. There is no official nation-wide language, though children are taught English in school. Consent forms need to be accurately translated into the range of local languages spoken in the vicinity of each clinic, and field workers need to be able to communicate in the major languages of that region and in English.

And, of course, explaining the science is challenging in any language. How can you explain concepts such as ‘DNA’ and ‘genetics,’ particularly in languages where these terms have no direct translations? How do you know if the explanations are understood sufficiently for consent to count as ‘informed’? According to the 2010 Population and Housing Census, the literacy rate for people aged 15 years or older in the region is just 40.95%, trailing Greater Accra (88.47%) and the national average (71.50%). In this context, the explanation given in-person by the field workers is crucial, as many people will not be able to read or understand the written information provided to them. Collaboration and discussion with trained linguists and ethicists is essential.

Once the blood samples have been collected, they must be transported back to the central lab at Navrongo Health Research Centre (NHRC) for processing. The trip may take hours even in good conditions, let alone during torrential rain. Ideally, the samples would be refrigerated but many of the field sites have no electricity, so the best we can do is provide cool boxes and hope the samples reach us before any degradation occurs. Once they arrive at the NHRC, we set to work, producing blood films (to look at the parasites under the microscope) and processing the blood for our experiments.

Limited resources and the tropical climate introduce regular challenges, often in unexpected ways. We once left blood spots (small drops of patient’s blood blotted onto filter paper strips for later analysis) drying for several hours, and returned to find the blood being eaten by flies. For one step of our experiments, we spin the blood down in a centrifuge to bunch all of the red blood cells together at the bottom of the tube. Frequent power cuts, especially common during storms, and a back-up generator that isn’t always available, meant that we had to spin the blood down using a manual centrifuge. This gets tiring when you have a lot of samples and it’s 40°C with no air conditioning. After spinning the blood cells down, we usually freeze the samples to extract the parasite DNA later. During long power cuts, we learned the hard way that some freezers will warm up enough for all the samples inside to melt. 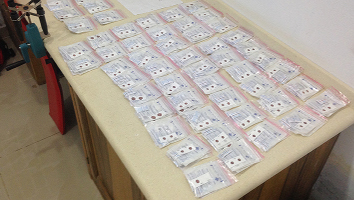 The blood films we make are then stained and visualised by trained microscopists. They identify the malaria parasite species and count the parasitaemia (the number of parasites per volume of blood).

Finally, we collate all of the information about the samples, such as location of collection and parasitaemia, and prepare the samples for shipment to the Wellcome Trust Sanger Institute, where the parasite genomes are sequenced.

A new outlook on the science

From a scientific viewpoint, working in the field gives a unique insight into the mechanics of the P. falciparum life cycle: the shifting intensity of transmission in northern Ghana is remarkable from June through to September, as the parasite population balloons and children start suffering in large numbers.

Field experience also highlights the importance of different malaria control measures: mosquitoes are rife in the rainy season, hence the need for insecticide treated bednets; antimalarial medicines remain crucial, as scores of parents leave clinics holding those small boxes of life-saving drugs; and an effective vaccine given to children would be transformative. Genetics can contribute to all of these control measures, for example by tracking mutations responsible for insecticide resistance in mosquitoes and antimalarial drug resistance mutations in the parasites. Seeing the potential applications and relevance of our research is highly valuable. 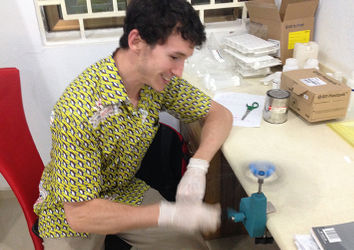 The realities of the field are also an exercise in empathy, making tangible the major challenges facing primary health systems and scientific research efforts in resource limited settings. Sample collection methods must be made as easy and robust as possible: ideally, they should require very little resources, no electricity, and be quick and painless for patients. The simple dried blood spot, obtained by a small fingerprick, remains one of the best-suited sample collection methods I have seen, given these requirements. It is humbling to remember that every clinical sample used in malaria research begins with a story like Rita’s: a sick person, often a child with their parent or guardian, volunteering to give their blood in the name of medical science. There is little or no direct personal benefit to them for agreeing to take part in these studies. They do so, presumably, hoping that it will help with efforts to control malaria.

This is the most important lesson that I’ve learned here: Every clinical sample is a precious donation, given altruistically by sick patients and often collected under tiring circumstances by dedicated and resourceful researchers. I’m grateful to all of the patients and their families from around the world who donate blood samples, and to the dedicated field workers who collect them. They form the essential foundation of malaria research.

*Rita is not the patient’s real name; it has been changed to protect her privacy.