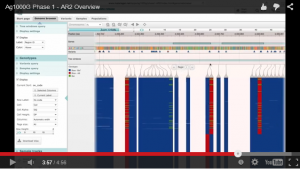 Malaria is transmitted from one person to another by mosquitoes. In parts of the world where malaria is endemic, targeting mosquitoes remains one of the best hopes for controlling malaria. Mosquitoes can be controlled by bed-nets treated with insecticides and by spraying homes with insecticides.

Resistance to insecticides has, however, emerged multiple times. This resistance has a genetic basis, and the mutations that cause resistance are spreading across African mosquito populations as I write these words. Without effective measures for mosquito control, malaria prevention in Africa has an uncertain future.

In Africa, most malaria is transmitted by mosquitoes of the species Anopheles gambiae. In 2013, a project was initiated to bring together a number of research groups working on malaria mosquito genetics. The main goal of the Ag1000G project is to study genetic variation in natural mosquito populations, by sequencing the genomes of over 1000 A. gambiae mosquitoes collected from different locations across Africa.

Such a comprehensive data resource could benefit many areas of malaria research, in a similar way to the 1000 Genomes Project, which has transformed medical genetics. In particular, it could help us learn more about how mosquito populations are evolving in response to selection pressure from insecticides and malaria control efforts.

Following 18 months of coordinated effort by several teams, we recently made a large public data release from the Ag1000G project. This release comprises whole genome sequence data on 765 mosquitoes collected from eight countries spanning sub-Saharan Africa. The wild-caught mosquitoes were collected at field sites by Ag1000G partners and sequenced in the UK by the Wellcome Trust Sanger Institute’s Malaria programme.

The release incorporates data on 44 million genetic differences (single nucleotide polymorphisms) found by comparing genomes from the 765 mosquitoes with the A. gambiae reference genome. This is more than the human 1000 Genomes Project discovered from a similar number of individuals, even though the human genome is more than 10 times larger than that of A. gambiae.

On average, we found one difference in every five base pairs of the genome, and we were being conservative. The true level of natural diversity in mosquito populations could be twice as high. Genetic variation is the raw material for natural selection, and with this level of diversity mosquito populations clearly harbour an extraordinary potential for adaptation.

As well as making all of the data available for download, our team at the MRC Centre for Genomics and Global Health in Oxford has developed a new web application to help researchers explore this extraordinary data resource. The video below gives a brief tour of the web application:

These data are an extraordinarily rich resource, and being involved in the Ag1000G project continues to be a great privilege. Every individual genome conveys the history of its own evolution, and many forces and events both ancient and recent have left their mark in these data. The full story will take time to unfold, however our initial analyses suggest that insecticide pressure has had a profound impact across Africa. We are now working on a paper describing this and other key features of the data.

I’m sure the Ag1000G data will reinforce the already widespread concern that mosquito populations are evolving rapidly in response to malaria control interventions. Hopefully these data will also reveal new ways of responding to this threat, and will become a resource for basic research into the development of new control methods. By providing a high-resolution view of contemporary mosquito population structure, these data could also provide a backdrop against which to track future changes in mosquito populations.

For now, the priority is to make these data available to those who need it, and to expand the data resource to include more populations. Although 765 genomes is a major leap forward, it is still a small sample from a large continent. Work continues and more data will be released in the next phase of the Ag1000G project.

Alistair Miles is a member of Dominic Kwiatkowski’s team and is jointly affiliated with the Wellcome Trust Sanger Institute and the University of Oxford. Alistair is the informatics lead for the Ag1000G project, a consortial project involving whole genome sequencing of 1500 mosquito specimens from 13 African countries.