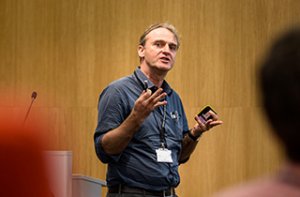 Tell me a bit about yourself.

I’m trained as an infectious diseases and intensive care physician, and developing ICU [intensive care unit] care in developing countries is an interest of mine. I’ve been living here, in Bangkok, for the last 15 years. During that time, I’ve mainly been doing research on both uncomplicated and severe falciparum malaria, a disease that requires intensive care in hospital. Over the last ten years or so, I’ve developed a strong interest in antimalarial drug resistance, which is an increasing problem here in the region – again.

You’re alluding to antimalarial drug resistance as a perennial problem in the region. Why do you worry so much about it here?

Historically, antimalarial drug resistance has first appeared here in Southeast Asia – the cradle of antimalarial drug resistance. There are several potential causes for that, but no one really understands why that is. Subsequently, resistant parasites can spread, firstly through the region and westwards into India, then across the ocean to Africa. We’ve seen this pattern with chloroquine resistance. We’ve seen it with sulfadoxine-pyrimethamine (SP) resistance. It might also be true now for artemisinin resistance, although it seems that this story is a bit more complex.

This time, we’ve detected artemisinin resistance relatively early. The hope is that, having learned from the past, we’ll be able to stop resistance before it reaches Africa, where most malaria occurs.

Of course, this is easier said than done. What are some key challenges in countering drug resistance?

Well, the vulnerability that we have at the moment is that we very much depend on Artemisinin Combination Therapies (ACTs). Without good alternatives to artemisinins for the treatment of uncomplicated falciparum malaria, we still have to use ACTs to treat the partially resistant parasites. Modelling suggested, and field observations now show, that this sustained drug pressure will mean that the last remaining parasite will be the most resistant.1 If this scenario holds true then we have to eliminate all falciparum malaria to get rid of resistant malaria.

You can slowly strangle malaria with very good control measures, like high coverage with early diagnosis and treatment with good quality drugs, which also means getting rid of counterfeit drugs; good instructions to local populations, so that they seek help appropriately. And, of course, good vector control. Bednets are, by the way, less effective in this region because of early and outdoor biting. But, we know that relying on these types of malaria control interventions for elimination will be a slow process, and we don’t have that time now.

We need to eliminate falciparum malaria before it becomes untreatable with ACTs. We have to be more aggressive than we used to be. One approach that we’re testing now in select villages with high prevalence is targeted MDA [mass drug administration] on top of a well-functioning village health worker network.

How can new technologies contribute to the success of malaria control interventions?

I think that you’re hinting at the more molecular techniques that we have nowadays. Well, the path to elimination will be a very difficult one. We will see small outbreaks of resistance and malaria. We have to be able to quickly ascertain why outbreaks happen; identify resistance problems at a particular time, in a certain area; and determine which resistant parasites are spreading through the region – these are all problems to which molecular epidemiology can contribute greatly. If there’s an outbreak, we can see if it’s resurgent clones that are expanding. If resistance is changing, we might pick up on it early with existing markers of antimalarial drug resistance but also with new populations of parasites appearing. And, looking at gene flow, we can detect ways in which the resistant parasites are spreading.

These types of observations are based on very complex data. Are public health authorities in a position to make use of this information?

At the moment, a more or less missing link is a close connection with the public health people – the ones who are on the ground trying to tackle the problem. Large-scale sampling, the collection of dried blood spots from the patients, is not really in place because public health authorities are not yet convinced that the resulting genetic data would help inform their malaria control interventions – drug policies, outbreak investigations. There’s a lot of communication that needs to happen, which in my view has to go both ways. It’s not just researchers trying to convince the public health officials that genetic data is important. Researchers also have to listen very carefully to what the needs are on the ground and learn about the questions that public health officials need answered.

So, as researchers, we need to listen to the needs of the public health community, and deliver very clear messages about how genetic data can be useful.

That’s a very good point. I haven’t discussed that too much but yes, indeed, you have to make very clear what the concrete benefit is of having this information.

The engagement needs to be at multiple levels. It’s about getting public health workers more involved in this whole research area. Because you know, we often speak different languages, so it takes time. One model could be to embed people from the National Malaria Control Programmes (NMCPs) within research units for a period of time. However, if we build these connections, I think we should look for ways to connect outside meetings, to sit down in more informal settings to really find out what their questions are – I think that will benefit both ways.

Do you find that different countries in the region share common concerns?

To some extent, countries in the region are facing different problems. For instance, increasing failure rates with ACTs in treating falciparum malaria is a particularly big problem in Cambodia. The questions raised there will be slightly different than in, for instance, Myanmar, where the problem is still at an earlier stage. Countries also differ in how keen they are to develop their own capacity for molecular diagnostics and techniques. But, in general, antimalarial drug resistance is a common theme and a big concern for every country.

To wrap up: What do you think are the three things that will have the biggest impact on efforts to eliminate malaria over the next five years?

Firstly, we need to maintain a sense of urgency about tackling drug resistance before it becomes unmanageable. The elimination agenda is now endorsed by all the [GMS] countries. If you look at the plans, they are sound in principle but they do not take into account enough, in my view, the risk of increasing antimalarial drug resistance.

The second thing is maintaining the quality and reaching full implementation of the many malaria control interventions that are being planned to support elimination. In my view, there’s a real advantage in focusing efforts on a relatively simple package of interventions that can be fully implemented including with hard to reach, vulnerable groups that are often not covered by the usual services.

The third thing – and here’s where molecular epidemiology comes in – is that we need very good surveillance. By the way, molecular surveillance will probably depend on the same sort of infrastructure that you need for the implementation of the other interventions. This can play a very important role, if supplemental to more conventional malaria metrics. In cases where conventional measures are insufficient, the molecular information can overcome some of the limitations of other epidemiological measures.

MalariaGEN has started a new project, SpotMalaria, which is harnessing genomic technologies to monitor the global evolution of malaria parasites, delivering knowledge that will increase the efficiency of malaria elimination and eradication efforts. To learn more, visit: https://www.malariagen.net/projects/spotmalaria