Understanding historical population movements and the study of malaria 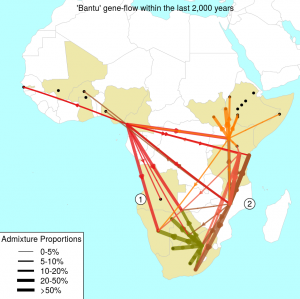 All of us, in our DNA, carry a rich record of our past – a fact that can be exploited to study human health and disease.

To better understand malaria, we compared the complete DNA sequence of thousands of people with severe malaria to thousands of healthy individuals to hunt down differences in particular genes between these two groups. These genome-wide association studies have identified several genes that appear to play a role in how susceptible people are to falling ill with malaria (Nature, 2016; Nature Genetics, 2015).

However, determining the significance of these genes in the progression of the disease is quite difficult for several reasons – many related to demographic patterns and the impact that the movement of people, parasites and mosquitoes has on the evolutionary tug of war that is malaria.

Having sampled a large number of people from across sub-Saharan Africa, our malaria susceptibility studies provide a unique opportunity to explore what DNA can tell us about the recent historical relationships between populations in sub-Saharan Africa (eLife, 2016).

We combined a subset of 1,266 samples collected through Consortial Project 1 with other publicly available data resources to create a data set including 328,176 high-quality single nucleotide polymorphisms (SNPs) – positions in the DNA sequence that tend to vary – for 4,216 individuals representing 48 different African populations and 12 non-African populations.

We then set about using this genetic data to reconstruct the recent past. When two populations with different ancestries come together and have children, their offspring will have DNA from both of these ancestries. This process is called admixture. Using sophisticated analytical techniques, we uncovered these admixture events in all 48 different African populations.

While several studies have documented admixture in other populations around the world, this study is the first to provide such detail in Africa – confirming that human history has been defined by admixture and that we are all, to a greater or lesser degree, related to each other.

Next, we attempted to characterise these relationships in detail: Who were the historical groups that came together and when did these events happen? We all originally came from Africa, with the main exodus producing all non-Africans happening some 50,000-70,000 years ago. Some of the clearest signals that we saw in our analysis involved the recent movement of people (and their genes) back into Africa.

For example, across West African populations from The Gambia and Mali, we saw evidence of a shared demographic event involving admixture from European groups. We were able to characterise these events because the DNA of West Africans contains chunks of ancestry from Europe together with chunks of DNA with African ancestry. The size and distribution of these chunks tells us that the admixture event likely happened around 1,000-2,000 years ago. Interestingly, the first recorded West African state, known as the Ghana Empire, grew by trading African gold with Mediterranean salt, cloth and beads in this region from c.300CE (Common Era).

The genetic traces of these human movements – and others (see further examples below) – reveal a rich record of our ancestral history in our genomes. Intriguingly, this work demonstrates that the same DNA can be used both to find out how humans have been evolving to fight malaria, and how we came to be where we are today.

This demographic foundation also helps us to understand how genes have spread around Africa, which, in turn, will influence how we try to find the genetic differences that provide some resistance to malaria and other infectious diseases.

The numbers on the maps refer to the following six specific events:

To learn more about this publication and access the data, visit: https://www.malariagen.net/resource/18